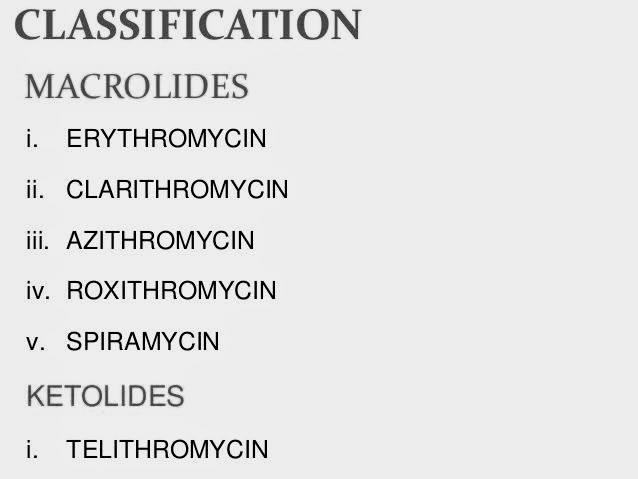 In this article, we will discuss about Macrolide. So, let’s gets started.

Macrolide is a class of antibiotic which are effective against Gram-positive bacteria (excluding enterococci) and limited Gram-negative bacteria, it is also effective against Mycoplasma pneumoniae, Treponema pallidum, Campylobacter spp., Bordella pertusis, Chlamydia trachomatis, Legionella spp., Borella spp., Chlamydophila pneumoniae and it includes following drugs as approved by US FDA:-

Macrolide primarily has a bacteriostatic action; however, at higher concentration it may have bacteriocidal action. It acts by inhibiting bacterial protein synthesis by blocking 50S ribosomal subunit. It prevents enzymatic activity of peptidyltransferase thereby preventing addition of growing peptide attached to tRNA to next amino acid.

Macrolide if taken with colchicine leads to colchicine toxicity symptoms includes GI upset, fever, myalgia, pancytopenia, and organ failure. It is not advisable to take combination of macrolide and statin as it leads to debilitating myopathy.

Note: Antibiotics and other medications should always be taken as prescribed by physician.

In this article, we will discuss about the Sign and Symptoms of acute pancreatitis. So, let’s gets started.

Severe and abrupt epigastric (upper abdominal) pain which commonly radiates to the back. Pain can also be dull, boring in character and is deep seated. Pain alleviates with knee flexion in sitting position or knee flexion in supine position.

Low grade fever along with restlessness and anxiety

A palpable mass may also be present.